A new perspective is needed in order to understand and interpret the approach to innovation in China, conclude Chesbrough, Heaton and Mei in their paper ‘Open innovation with Chinese characteristics: a dynamic capabilities perspective.‘ 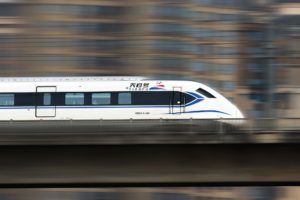 The State Council turned to advanced technology abroad but made clear in directives that China’s expansion must also be used to develop its own high-speed train building capacity.

Using presidential speeches, reports and interviews, the researchers analysed the role of the state in Open Innovation, using the Belt and Road Initiative (BRI) which aims to connect China to the outside world through infrastructure and knowledge exchange.

Both the high-speed rail industry and semiconductor industry play a key role in the implementation of the BRI, which can be considered a country-level policy of ‘Inside-Out’ open innovation.

The authors observe that China’s path to prosperity is very different to the Western model of a ‘limited role for the government, with strong private property rights’. They offer instead a novel combination of innovation theory that is illustrated through strategic management frameworks: dynamic capabilities and OI strategy.

The dynamic capabilities framework (Teece et al, 2016) is concerned about how companies create and sustain competitive advantage in a rapidly changing environment.

When firms invest in basic research it inevitably results in ‘spill-overs’, findings that the company cannot successfully exploit using its own resources.

In OI theory, these spill-overs are considered as inflows and outflows of knowledge that can be managed to the benefit of the firm – to source further knowledge from external sources or to share knowledge with others in the ecosystem.

In Western cultures the most successful companies are often those that have strong dynamic capabilities:

These activities must be performed expertly if the firm is to remain relevant as markets and technologies change.

The Chinese government seeks to obtain the many benefits of OI, while guiding the economy forward at the same time. This is something that is completely new to OI in both theory and practice and creates a tension between government and the market.

A key policy was China’s commitment to the ‘four vertical and four horizontal’ high-speed railway network planning roadmap in 2004. This policy clearly stated the intention to construct a 12,000 kilometres high-speed railway network throughout the country. This was roughly equivalent to all of the HSR lines that had been installed in the rest of the world to that point in time.

Selection by the tender offered the winning bidder the chance to sell high volumes of equipment in China, and set the standard for China and perhaps the rest of the world, since there would be opportunities to export to new markets enabled by the government’s BRI initiative.

Xi Jinping thought aligns well with the situation in the HSR. This market is driven by infrastructure development, where governments play a critical role in authorising, funding, and sometimes operating the HSR systems.

However, the innovation record in the semiconductor industry is more mixed. It has been characterised as a tale of two very different segments. One segment is focused on the large domestic market in China, while the other consisting mainly of the privately-owned companies (POC) is anchored in extensive international supply chains, and exports most of its output.

The high degree of capital intensity enables the government to guide and direct the development of manufacturing facilities. The design segment, by contrast, receives little attention and no government funding and as a result has been more agile and more adaptive. It contributes almost two-thirds of China’s growth and nine-tenths of new jobs in the industry.

China’s biggest tech POCs leverage China’s market scale and their own R&D to produce innovation-led growth. In doing so, they have developed the dynamic capabilities need to adapt continuously and stay on top of their competition. These companies have also been the primary source of new technological innovations introduced into China.

From these examples it would appear that the government aligns well with state owned enterprises, but poorly with POCs and foreign companies.

Achieving and sustaining dynamic capabilities across major Chinese markets will require much more than managing the SOEs.

If the government persists in playing a very strong role, this will advantage certain industries with concentrated demand like HSR, but may disadvantage many more Chinese industries with decentralized demand, and this is where POCs and foreign firms provide critical contributions to innovation.

However, there is another path available to the government, namely to embrace and promote OI strategy within and outside the country. Such a policy will increase the sources of useful knowledge available to innovative organizations like POCs in China.

The authors also offer some deductive guidance for managers of companies considering the Chinese market.

Belt and Road InitiativeBRIChesboroughChinaChineseinside out open innovationopen innovation
Previous PostAs physics advances our journey through the u...
Next PostContextual Specificity in R&D Management - an...