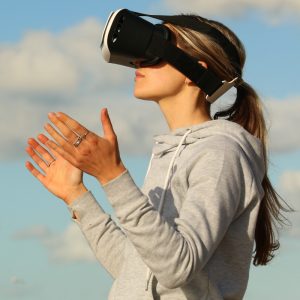 Smart glasses could help you be more productive, according to research by a team at IfM investigating how augmented reality affects human work in an industrial setting.

Two groups of participants were given instructions for fixing a damaged car windshield – either via smart glasses or via a smartphone app.

Smart glasses are wearable, head-mounted displays with multiple sensors and processing capabilities, which superimpose information or virtual objects onto real-world settings in real time: ‘augmented’ reality rather than virtual reality.

The results were intriguing. Subjects who were using smart glasses in this experiment delivered a higher quality of work and a faster performance than those using smartphones.

When the experiment was repeated with the same subjects four weeks later, both groups improved on their original performance, but the increase in productivity of those using smart glasses was substantially better than those using smartphones.

Another study investigated the effectiveness of virtual reality and haptic gloves for the learning of new skills.

Haptic gloves give human hands feedback information – this could be through vibration or force or other sensual feedback, for example if a human grabs an object like a mug in virtual reality, the gloves hold the fingers in place to simulate the gripping sensation.

The participants in the study were taught a new skill – the assembly of a tractor clutch provided by John Deere. Three different teaching approaches were used: paper-based instructions; virtual reality technology with two controllers and a headset; haptic gloves with force-feedback and a headset.

All three groups were then asked to perform the same clutch assembly task in reality with a real clutch, and performance was measured and compared across the three training methods.  For this study the virtual reality technology appeared to have the edge but the group wearing the haptic gloves also needed to learn how to use the gloves and this may have impacted performance.

Thomas Bohné, Senior Research Associate, Department of Engineering, University of Cambridge, comments that the group are only just starting to uncover the potential benefits of what’s possible.

He says: “The haptic gloves (in their current stage of development) may demonstrate a stronger benefit for training for procedural tasks where each stage of assembly is straightforward, like tightening a screw, but where the order required to perform the task isn’t always clear. For skills requiring a lot of dexterity, we may need to wait for technological development of the gloves before we start to see an impact compared with conventional training.

“Geographic location is an interesting factor too. For distributed teams spread across different sites, using virtual technology could enable people to experience the same training or working environment without the need to travel.

“There could be much wider benefits in terms of co-working, sharing environments where skills can be demonstrated and transferred between people in different places.”

More information about this study is available: https://www.ifm.eng.cam.ac.uk/insights/technology-strategy/can-cyber-human-technology-help-us-learn-skills/