The Cost of Time in R&D projects 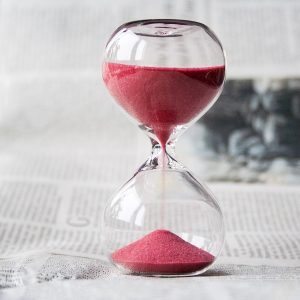 R&D projects often run late and managers face the issue of what to do if this happens, or indeed what measures to take to prevent it in the first place. Our aim here is to find simple ways of estimating what the impact of any delay to a particular project would be, in financial terms. This is a vital input into deciding what actions are worth taking.

Clearly the cost of delay will vary from one type of project to another so the first aim is to find how to categorise projects according to the impact that delay may have on them. We then seek ways to estimate, at least as a Rule of Thumb, the cost of delay for each type. The estimate is bound to be approximate but one aims to be able to say, “A week’s delay to this project could cost the company of the order £XX”.

The following things may contribute to the cost of delay in an R&D project:

In what follows we concentrate on the first group because these are generally much larger and more similar across projects and companies. 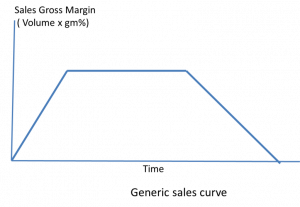 The money a company stands to make on any product is the new sales that it generates over its lifetime multiplied by the percentage gross margin (we call this the Sales Gross Margin), minus the costs of bringing it to market. This is the cash that comes in the door. Of course in working out the profit one would need to include overheads and start-up costs but if the project is already committed the other costs and overheads would happen anyway; so the cost of any delay would be, broadly, just the impact on the total Sales Gross Margin.

The sales of new products generally begin with an initial phase when the sales develop. The gross margin as a percentage may change during this period as the price and costs stabilise. There follows a time when sales and margin are broadly stable, followed by a period of decline. This is shown schematically in the graph opposite (Generic sales curve). 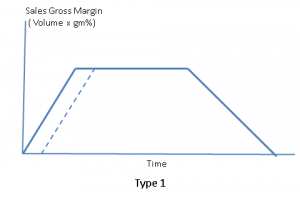 We now make the key assumption that the point at which sales start to decline is determined by external factors such as competition or the expiry of patents, rather than being chosen by the company. The effect of a delay to the launch would then be to move the front of the sales curve to the right, while the back end remains in place, as shown dotted on the Type 1 graph. We assume for the moment that the shape of the sales curve is otherwise unchanged.

The Base Case: Type 1

The simplest case is a brand-new product that does not displace or cannibalise any existing ones. In this case the cost of a delay of X months at launch is simply a loss of X months of the mature Sales Gross Margin. This can be surprisingly large. Suppose the mature sales are £10 million units a year at a gross margin of 60%. The loss of gross margin caused by a delay of just one week would be £120,000. This, then is a measure of the cost of delay, and an indication of what it would be worth to prevent it. It is, of course, a simple and perhaps extreme case but the numbers involved give pause for thought. In any case the calculation is straightforward – most companies will have an idea what mature sales to expect – so it is worth doing the simple calculation before going into more detail.

We now consider circumstances in which the cost of delay may be more, or less, than the base case.

Two effects may make the impact of delay even greater than in the base case. First the initial period of sales growth may be lengthened because the competition is stronger and better entrenched, cutting into the total sales, as shown below. We call this Type 2: 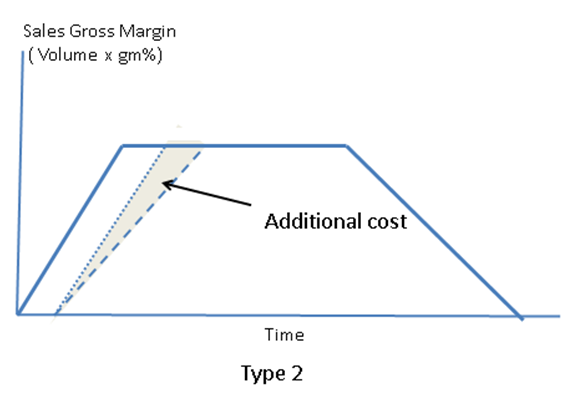 Furthermore, in some cases a late launch may lead to permanent loss of market share if it gives competitors a serious head start. This is Type 3: 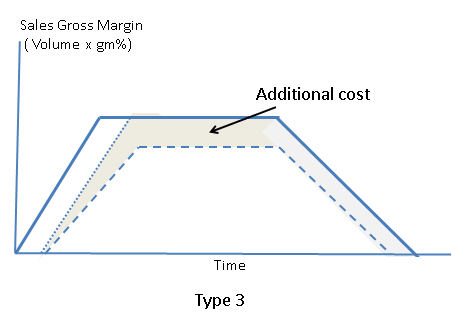 These two situations would lead to the cost of delay being even higher than in the Base case, although just how much depends mostly on the actions of competitors and is difficult to estimate. But it may, at least be possible to identify those projects that are most at risk.

We should also note again that a late launch may carry extra costs such as extra development work or the cancellation of launch arrangements already made.

The effect of preceding products 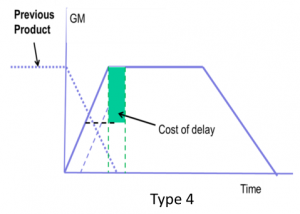 Many new products are designed as replacements of earlier ones, aimed at generating extra income either by cost reduction or because they have improved features that will generate extra sales. If the launch of such a product is delayed the company has the option to go on selling the previous one for a period. If the new product is a direct replacement for the older this would eliminate the cost of delay entirely – but then the new product would have been unnecessary! More probably, one can identify two scenarios:

The first, which we call Type 4 is illustrated below. Here the sales of the preceding product are starting to decline when the new one is launched so the impact is reduced but not eliminated by continued, but reduced, sales of the predecessor.

The second possibility, which we call Type 5 is where the preceding product is not yet in decline but the new product is launched as an upgrade intended to produce extra margin either by cost reduction or by extra sales or higher price. The cost of delay would be the loss of these benefits for the period of the delay as shown below. 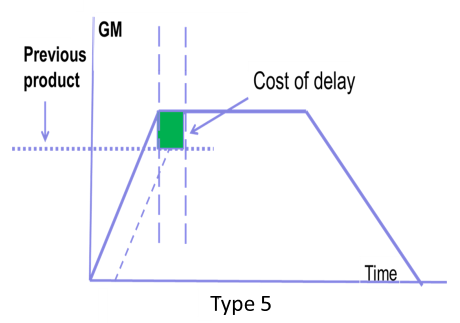 We have discussed a simple approach to estimating the financial effect of delay to an R&D project based on the assumption that the lifetime of the product is determined by external factors rather than the choice of the company. Five different situations are identified. The baseline case (Type 1) is of a new product that does not cannibalise previous versions. This is quite easy to calculate because it requires only an estimate of the mature sales level. In Types 2 and 3 the impact is greater because the late launch affects both the speed of uptake of the project and possibly the long-term market share. In Types 4 and 5 the effect of delay is lessened by the possibility of continuing to sell a previous version of the product during the period of delay. Calculations are more difficult in these other cases, Types 2 and 3 are particularly difficult

The most striking thing about these calculations is the high level of costs predicted, indicating that preventing slippage should perhaps have a higher priority than it typically does.

This approach is approximate but is certainly a lot better than nothing. It should be useful in deciding what expenditure may be justified to prevent or minimise delays – or even to shorten the development project from the start. The base calculation may be used as a starting point. Greater priority would be given to projects that are identified as being of type of Type 2 or 3, and less to types 3 and 4.