As customers we have all had the experience of being disappointed by a new version of a product which just adds some fancy ‘bells and whistles’ but doesn’t improve the things that matter to us. Still worse are the ‘improvements’ that just add unnecessary complexity and leaves us less satisfied rather than more.

Different types of feature have different effects on customer satisfaction, as was recognised by a Japanese Quality expert, Noriaki Kano, in a classic paper back in 1984. His analysis is just as relevant now as it was then.

Kano classified the features of a product or service into three categories according to the effect they have on customer satisfaction. These are shown, schematically, in the figure below. The horizontal axis is the level of implementation of the feature and the vertical is the customer satisfaction it gives. (The units of measurement are not closely defined). The three categories of feature follow different curves reflecting their different effects on customer perception. 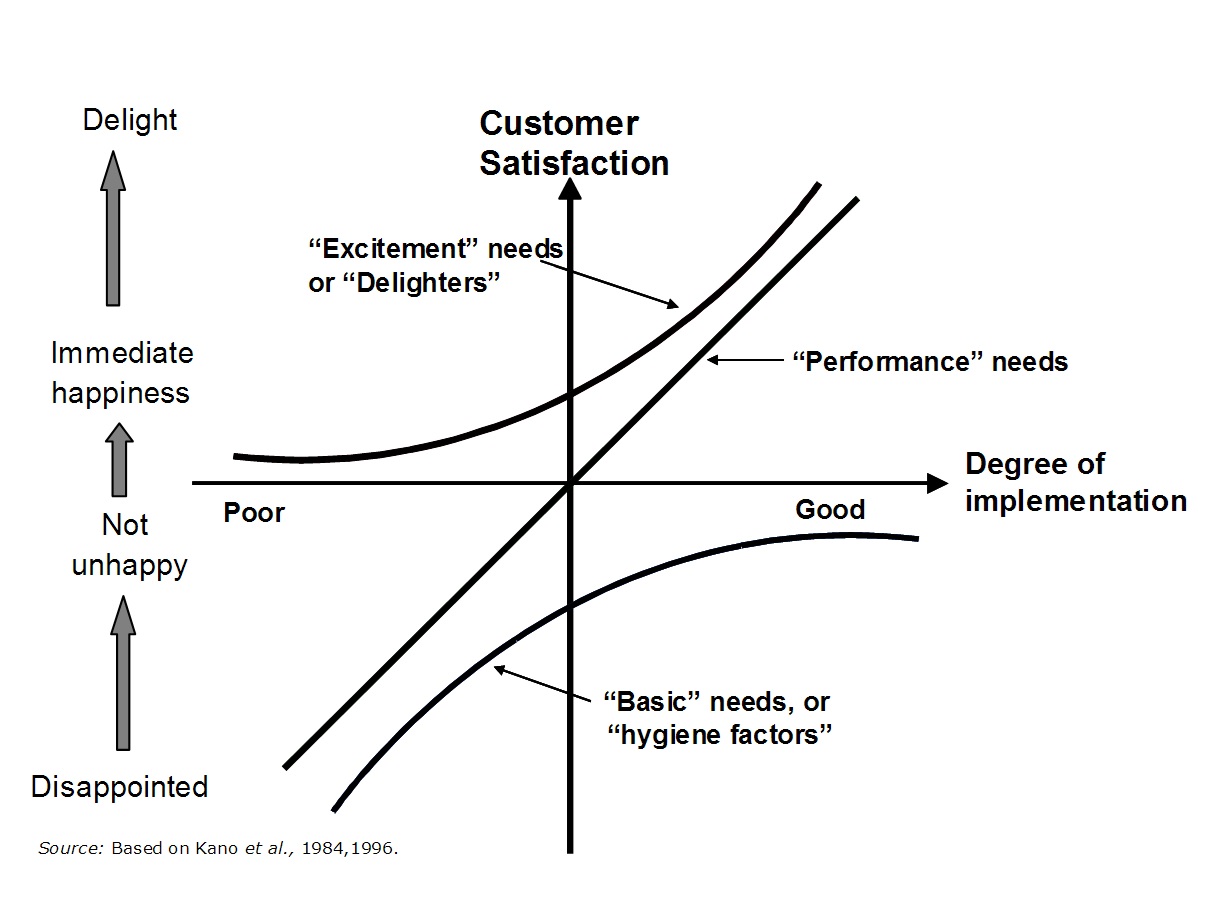 Some Delighter features are easily copied and so give only short-term advantage to the innovator, but some introduce a whole new dimension of customer satisfaction and competitive advantage. 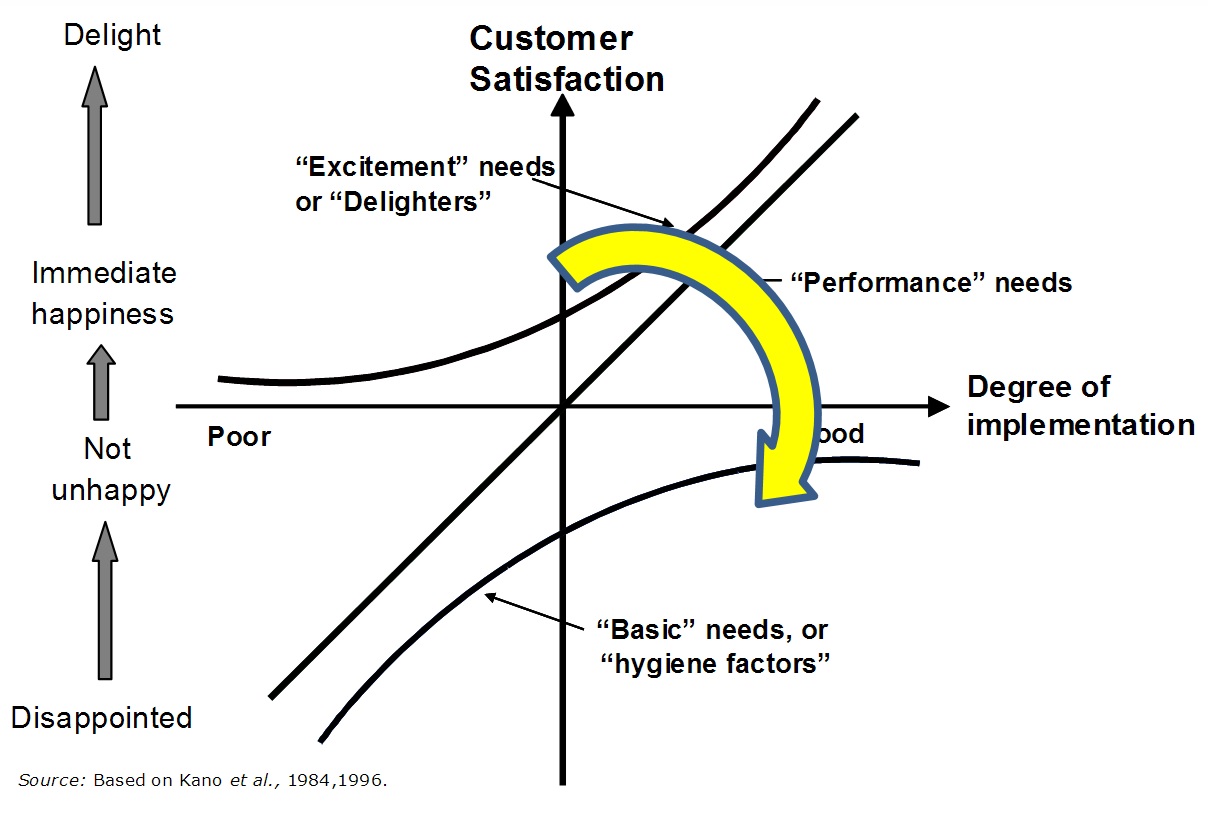 You can decide which category a particular feature belongs to simply by asking customers how they would feel about having more, or less, of it. If they would be disappointed by a reduction but pleased with an improvement then it is a Performance feature. If a reduction would be disappointing but the customer would be indifferent to improvement then it is Basic. If its absence is unimportant but customers would be pleased to have it, then it is a Delighter.

In the Longer Term…

It can be very instructive to plot the key features of your product on a Kano diagram to see if you have the right mix and to compare them with the competition. More important, though, is to look forward and ask the question “Where will these features be in, say, 5 or 10 years’ time?” The point is that things tend to rotate clockwise on the diagram over the course of time.

Delighters are likely to be copied, or at least to become well-known, so merely having them is no longer an advantage. They will drop down to become Performance features, a focus for renewed competition. But Performance features themselves will eventually reach a point when improvement gives little or no further customer satisfaction, and they then drop down to become Basic. Think of the fidelity of audio recording, for example. We call this “Feature Fatigue”.

Companies can easily be caught out by Feature Fatigue because they may have been driving improvements for very many years and it becomes almost part of the company culture. I remember the shock of doing this analysis and realising that there was actually no sense in continuing to improve the reliability of our product – which had been a bone of contention literally for decades – because our customers could no longer detect the difference.

Companies who fail to notice the onset of Feature Fatigue are vulnerable to a competitor whose product perhaps offers a different mix of Performance features and Delighters. These are Disruptive Innovations and there are many examples. For example, airlines used to compete mainly on comfort and cabin service. The low-cost airlines such as Ryanair and Easyjet recognised that there is a limit to how much of these customers really need, especially on short-haul flights so they offered less of them in exchange for lower cost and more destinations. Kodak failed to move into digital cameras which (at the time) offered less fidelity and resolution than the older chemical methods but had advantages of convenience, flexibility and ease of use.

Another problem that may be shown up by projecting the Kano analysis forward is not that the customer’s appetite for improvement is waning but that the company’s capability to provide it is running out of steam. The current technology is going to reach a Capability Ceiling and it is time to start developing a successor.

I have found the Kano analysis a very helpful tool in looking at priorities in product development and especially in spotting problems coming over the horizon.

Kano’s original paper is: ‘Attractive Quality and Must-be Quality’ in the Journal of the Japanese Society for Quality Control vol14 no 2 pp39-48 (1984)