Ideas are stimulated by problems. In the business context the most fundamental problem is “what do our customers (internal or external) actually need?” The traditional way to find this out is by using surveys or interviews, which are important and vital tools that all marketers should know about. There are classic texts on the subject by Oppenheim[i] and Dillman[ii], for example. 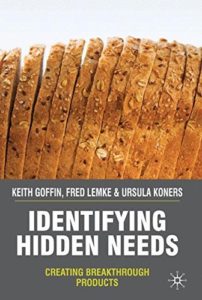 However, customers’ ability to comment on products and services is limited by what they are used to and what they imagine to be possible. There may be things that they would appreciate but do not immediately think of, their so-called Hidden Needs. A good example might be the TV remote control. I don’t imagine that anyone ever went into a shop and asked for a TV remote control before it was offered but the need was clearly there.

One well-known way to approach hidden needs is the Focus group, which at its best can be a combination of interview and brainstorm. Another way, pioneered by Eric von Hippel at MIT is to engage with Lead Users, who are groups of customers who face more challenging requirements than the rest of the current market. Studying them lead can give insights into the hidden needs of the mainstream because features that are important for them now may become important to others later. There is a caveat, though: the requirements of some Lead Users are specialised, and may never actually become relevant to the mainstream. Following them can lead to unnecessarily complex or costly products.

Interview can be made more probing by using Repertory Grid analysis. The basis of this is that the interviewee is first asked to select half a dozen products broadly like the one in question. The interviewer then selects three and asks “Can you tell me one way in which two of these are similar but differ from the other one?” The answer gives the first construct: an aspect of operation or design that differentiates the products. All the products are then given a score for that construct and another three are selected. Usually after a number of rounds the interviewee starts saying, “that’s interesting, I never thought of that, but….”. And you start finding the hidden needs.

A further, related approach is so-called Ethnographic Research, which means careful and structured observation of how customers actually use the product in practice. This is time-consuming but can give good insights. For example it was how Miele, the German vacuum cleaner manufacturer, recognised that users would value a something that told them when the surface was clear of dust. There is now a simple dust detector in some of their products. This kind of research requires careful preparation, however, because it is easy to miss vital clues.