Decisions in projects: how good is intuition? 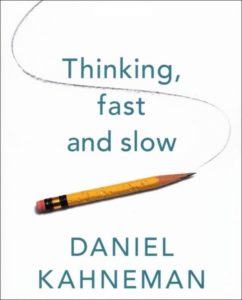 In managing the R&D pipeline we are constantly called upon to make decisions and estimates on the basis of thin or inadequate information. We have to estimate the time that a particular task may take, or how many people will be needed, and decisions have to be made about whether to start a project or cancel it. But there are always many unknowns, particularly in the early stages of a project. So everyone knows that however hard you try decisions have to have a good element of intuition in them.

Intuition can be very powerful: a doctor can often tell almost at once what the problem is, and an art historian may be able to spot a fake with barely a moment’s study. Their intuitions are very reliable because they are based on a great deal of relevant experience and practice. But when faced with novel situations (as so often when we make judgements about R&D projects) our intuition is surprisingly easily led astray. There’s a whole body of work on this in the field of Behavioural Economics.

One startling example is Anchoring: our tendency, when called upon to make a judgement on something unfamiliar, to be biased by a recent input. Try asking two groups of people separately to estimate, say the highest point in Australia, or the age of the oldest tree in the world. But start by suggesting a figure, high for one group, low for the other, and asking getting them to state whether the height or age is more or less than that. Then ask for their actual estimate. The estimates they give are surprisingly skewed by the suggestion given. According to Kahneman the effect on the estimates is typically one third to one half of the difference between the “anchors”. His hugely popular book, ‘Thinking, Fast and Slow’* gives an easily accessible overview of the issues. Some other sources of bias that he discusses are:

What can we do about this?

The first thing to recognise is that everyone has a different background of knowledge and experience, and we are all biased in different ways. So it is always advisable to pool the experience of a small team of people rather than relying on a single expert – particularly as the person with the most understanding of the project is likely to be biased in its favour. Then you can help the team to be as objective as possible by: