The R&D Management Conference has something for both industry and academia, says RADMA Chairman Jeremy Klein. He observers how the conference has gone from strength to strength. He writes:

As I sat in the packed initial session at the 2018 Milan R&D Management Conference I was thrilled to hear that it was the largest to date, with 499 participants from academia and industry. Ahead of the conference was also a colloquium with 41 students involved.

To put this in context, the 2013 Manchester conference had 110 attending, with previous conferences in the series fluctuating between 80 and 120.

With so many people at the conference, even the process of moving people upstairs for coffee and back again turned out to be a logistical challenge. Although, being in Italy, the coffee was worth queuing for. 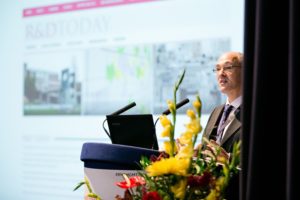 A couple of days later I had the opportunity to address the conference – along with Ellen Enkel, the editor of the R&D Management Journal and Letizia Mortara, a Cambridge academic who has been developing the conference series on RADMA’s behalf.

I commented that we had seen an amazing return on investment. Our investment has enabled a conference office to be set up in Manchester and then Cambridge to professionalise the operation and to facilitate the sharing of experiences and databases from one year to the next.

As one might expect, the conference was very international. This was illustrated brilliantly during the conference dinner which coincided with two Wold Cup matches. Every now and again a cheer would spontaneously erupt from one or two tables as a goal was made (or saved), followed later by cheers from other tables with different nationalities and different goals to celebrate.

I’ve attended the R&D Management Conference over the years and have often been asked what the value is to a practitioner such as myself. For me, it’s often snippets of ideas that I’ve never come across before.

This year I was intrigued by a paper by Masis Arslan on ‘product generation engineering’; the recognition that rather few products are ever designed completely from scratch and most products are a revision of a previous generation. This is certainly the case in automobiles but also in many other industries.

Then there was a paper on design thinking by Mattia Bianchi, suggesting that working out the problem to be solved is at least as important as solving it. One can never go wrong by quoting Einstein, and this quote stuck in my mind: “If I had only one hour to save the world, I would spend fifty-five minutes defining the problem, and only five minutes finding the solution”. When I looked this up subsequently I found that the link to Einstein is very tenuous. But it’s an intriguing idea that has already affected how I work.

One of the keynote presentations – by Melissa Schilling – discussed her research that collaborations in a field were a leading indicator of activity, some four years in advance of acquisitions.

Another keynote speaker – Chris Bishop from Microsoft Research Cambridge – sought to explain why artificial intelligence is enjoying such growth just now. For him it is the coincidence of massive computing power, powerful algorithms and big data. And that these are self-reinforcing trends.

Do conferences have a future?

What excites one’s interest is very personal, and these are just a few of the ideas that caught my interest. In these times of electronic communication some people predict that conferences will die away. I’m sure that the opportunity to hear new ideas and discuss them there and then is one of the reasons why conferences are still so popular. Surprisingly, perhaps, there’s less of a divide between academics and practitioners than one might expect.

Most people I spoke to were impressed how the keynote speakers in Milan managed to straddle theory and practice equally.

I hope I have given a flavour of the Milan conference and even slightly excited your interest in the 2019 conference in Paris.