How do you balance the job of achieving today’s targets with radical innovation?

Design thinking is the application of design methods and tools to innovation challenges. A Design Thinking approach can help organisations to become ‘ambidextrous’, that is, to pursue the competing agendas of exploitative innovation and explorative innovation in parallel.

To do both requires a shift in the shared cognitive frame to embrace ambiguity, unpredictability and risk-taking, unfortunately, the effort to create an ambidextrous organisation often results in inertia.

However, some businesses are successful, such as the Australian property development company Urban, and studying its journey provides interesting learning points for other organisations.

How to achieve an ambidextrous innovation portfolio? 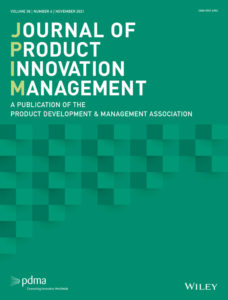 Researchers Krithika Randhawa and her colleagues Natalia Nikolova, Sumati Ahuja and Jochen Schweitzer in their article “Design thinking implementation for innovation: An organization’s journey to ambidexterity” studied the journey of Urban, a leading Australian property development company in its bid to become ambidextrous.

The case-study aimed to address a number of gaps in the existing literature by asking: ‘How do managers leverage Design Thinking for innovation (DTI) to support their organization in its shift to achieve an ambidextrous innovation portfolio?’

Specifically, they examined how middle managers use a Design Thinking approach to shift the cognitive frame of their organization to ultimately attain an ambidextrous innovation portfolio.

Design thinking takes the perspective of the user experience in finding their current and emerging needs, as opposed to the traditional “user preference-driven” approaches that focus on collating knowledge from existing markets.

In particular there is an important role for prototyping and testing with new users, which inevitably reveals potential for failures before breakthrough innovation is achieved.

Urban Property Australia is a leading, publicly listed Australian property group that owns and manages commercial offices, retail centres, and residential and industrial properties both in Australia and internationally. The company was selected after a qualitative study with 21 CEOs from leading Australian companies identified that Urban was about to embark on a new innovation strategy.

Urban is led by a CEO, Chief Financial Officer (CFO), Head of Strategy, Chief Information Officer (CIO), and Head of Culture. Each of its three Business Units (BU) — office and industrial, retail, and residential— have its own Head. Together, these form the top management team (TMT) of Urban. Reporting to the BU Heads are the BU general managers who form Urban’s middle management.

The study covers a period when Urban began to make deliberate changes to improve its strategic innovation portfolio, starting with the launch of a new innovation unit called Nest.

A series of workshops were used by Urban’s Innovation Director, a middle manager, to define broad areas of focus. This resulted in eight missions with a balance between explorative and exploitative innovation, each with different risk profiles and time-frames.

22 volunteers were recruited as Innovation Champions and trained in design thinking, with a brief to spend two-three days each month on innovation projects.

The Innovation Director in the organisation used three DTI practices in phases:

To translate the missions into innovation ideas, the innovation champions used a creative problem-solving approach (Dell’Era et al., 2020) to “go and talk to customers around these [missions] to actually identify specific challenges that [they] want to solve … in line with our strategy.”

The Nest training materials expand: “Importantly, we’re looking to uncover the gaps in the customer experiences when trying to get these jobs done — … if we find the gap between what the customer wants and the available solutions— that is where the opportunity is. These are the innovations that are highly successful … the gap when someone comes up with something new!!!”

The team took about a year to get comfortable with the DT approach, which required coaching from the team leader.

However, after two years the Heads of the Business Units were beginning to be sceptical about the focus on explorative innovation and unconvinced that DTI was producing sufficiently quick and tangible innovation outcomes.

BU managers felt that the innovation portfolio was not well-aligned with Business Unit needs and the investment and time commitment by the innovation champions was questioned and inertia began to creep in.

By the end of 2017, five of the eight missions had stalled.

The Nest Innovation Director remained confident, saying: “it’s not something you rush, and we’re fine with that because we’d rather spend a lot of time and experiment and get it right than launch something that’s wrong.”

The Innovation Director did accept that it was crucial to demonstrate quick solutions to the BUs, so Nest’s portfolio management focus was shifted to pursue exploitative innovation projects via design sprints.

Dedicated innovation leads were appointed to create a structural separation and they concentrated on design sprints using prototyping rather than need-finding. They were paired with BU managers to support innovation that would be directly relevant for the business unit and involve the BU managers in the decision making about innovation projects.

From a cognitive perspective, the visible success of design sprints both fed and reinforced the exploitative innovation frame among BU managers. It enhanced their confidence and buy-in to use DT as a legitimate approach for innovation.

Coordination across the BUs and Nest led to progress in both explorative and exploitative innovation. It also fostered organisational connectedness.

Progressively, as people from across the organization were exposed to and recognized the value of DTI, they started applying it in their day-to-day practice; one person said: “I’ve found the DT training to be an amazing tool not just for the missions, but for everything I do. I look at things from a totally different perspective.”

Thus, The Innovation Director, a middle manager, overcame inertia, or resistance to innovation, by employing specific DT practices: problem-solving, design sprint execution and creative confidence building, which each, in turn, expanded the collective cognitive frame of the organization, and enabled the transition from explorative to exploitative and ultimately to ambidextrous innovation.

Additionally, Nest had engaged in over 2,500 direct customer interactions and raised AU$7.9 million to seed fund Nest projects. The team had trained close to 25% of Urban’s workforce, including 165 now skilled and experienced innovation champions.

In 2020, Urban received global recognition for its innovation achievements, ranking in the top 10 of the world’s most innovative companies in its category. This ranking was based on three explorative innovation projects that delivered innovative solutions for commercial, residential, and retail customers.

The emergent, adaptive implementation of DTI driven by a generative response when faced with inertia that shifted the cognitive frame across the organization was summarised by Urban’s CEO, on the company website:

“Over the last few years, we have been working towards a culture of innovation where everybody believes it is part of their job to challenge the status quo and reimagine what we do. This transition has been championed by our innovation team [Nest] … We are changing the way we problem solve as a business.”

Despite starting with an overly optimistic deliberate strategy and having setbacks to DTI adoption along the way, freezing of the cognitive frame in each phase triggered a generative response to inertia, enabling the organization to progressively build the resources and legitimacy for DTI.

The authors conclude: “Drawing on these insights, we have developed a process framework of how different DT practices and related generative mechanisms can be deployed flexibly to adapt to the interim (explorative and exploitative) innovation objectives over time.

“We argue that freezing the innovation frame in each phase can trigger a generative response to inertia, which enables the organization to transition more radically to an ambidextrous innovation portfolio.

“Thus, we have contributed to the limited design thinking research on the role of cognition in DTI implementation, and more generally to innovation management and ambidexterity research on how leveraging DTI to achieve an ambidextrous innovation portfolio is an emergent and adaptive process.”

Design thinking implementation for innovation: An organization’s journey to ambidexterity is published in the Journal of Product Innovation Management 2021:00:1-33