R&D Management Conference looks to the future of metanationals

Is this the age of metanationals? Companies such as Google, Amazon, Unilever, Dyson are becoming effectively stateless, choosing locations for technology development, personnel, factories and  executives based on where regulations are friendly, resources abundant, and connectivity seamless. This is creating challenges for R&D managers and new models are required.

Professor Yves Doz of INSEAD opened the 2019 R&D Management Conference offering insights into the changing world of the globalisation of innovation. The idea is that the traditional multinational is now giving way to concept of the new ‘metanational’.

The R&D challenge in such organisations is that the more complex the R&D knowledge is, the more difficult it is to disperse it across sites. With a developed conceptual model as background, Professor Doz suggested ways that collaboration and communication could be encouraged in metanationals.

The annual R&D Management Conference was held in Paris, a joint venture between two of the most prestigious French higher education institutions, École Polytechnique and HEC Paris. 450 people attended, a slight reduction on last year’s Milan conference, but still way more than the 80 to 100 routinely coming a few years ago.

It is supported by RADMA but the business model for the Conference lets the host institutions shape the event while maintaining a level of consistency from one year to the next. This time the organisers had put a lot of effort into assuring the intellectual quality of the contributions, and it showed. 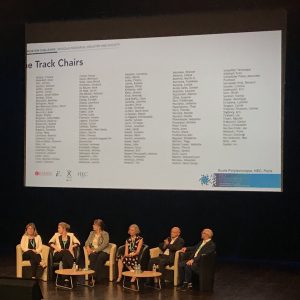 In the two days before the conference there was a PhD colloquium. This was the fourth such colloquium and 40 students participated, both helping build the upcoming generation of researchers and also making the conference the number one choice for students.

In addition to the plenaries, the conference help were up to 12 parallel sessions. These were mainly ‘tracks’ proposed by participants to cover their chosen hot topics – such as Artificial Intelligence & Data Sciences, Co-creation, Creativity & Design, Industry 4.0, and Sustainable Development. The reason why there were so many sessions is that plenty of time was included for discussion of the papers, which was a great advantage. The downside was that it was often frustratingly difficult to choose what sessions to go to!

As well as the sessions with papers, the organisers had invited proposals for workshops and masterclasses. I went to a workshop on 3D printing and a masterclass on managing exploratory projects.

The masterclass was run by Sylvain Lenfle and showed how the mainstream techniques of project management had often been uncritically used to manage more open-ended projects where they were not really appropriate.

Each and every session had someone from École Polytechnique or HEC there to tweet content and pictures. In fact, there was so much Twitter activity that the conference hashtag was the most tweeted hashtag in France that day.

By tradition, towards the end of the conference, the next year’s conference location is announced and the organisers take to the platform.

In 2020 the conference will be in Glasgow with the theme ‘Innovation across Boundaries: Historical Reflections and Future Vision’. There will also be a RADMA symposium – in Vancouver – on ‘Invention to Innovation: Creating the Conditions for Impact’. Overall this was a vibrant and thought provoking conference that covered topics both academic and practical, and often both at the same time.