Creativity in times of uncertainty 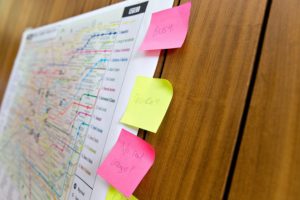 Given the recent political turmoil, with Brexit, terrorist outrages and leadership elections all over the place, it’s easy to feel unsettled. This sense of unease can have knock-on consequences on our ability to be creative and come up with new ideas, even in the nominally separate world of R&D.

However, I find it helps to remember that times of change, uncertainty and “failure” are also times of opportunity and new ideas.

When hard at work managing a big R&D project, just as when campaigning for or against Brexit, it’s only human nature to be 100% focussed on the rightness of what one is trying to achieve. Warning voices get ignored. Dissent is unwelcome. If the project “fails” or your campaign loses in the polls, again its only human to feel gutted.

However, it’s very noticeable that the most successful innovators, and the most successful R&D managers are those that succeed in turning the “failure” into the seeds of future successes. They ask “why?” .. genuinely interested in discovering the true root causes for their “failure”, and they act on what they find.

For example the Brexit vote opened the establishment’s eyes to the massive levels of discontent that they’d been happily ignoring. Within a month we had a new prime minister. They ask “how can we make something good from this?” They overcome their disappointment, and look for the positive in the unwelcome outcome.

For example, Post-it notes were the result of a failed superglue. Penicillin the result of a contaminated Agar plate. They recognise that, as one manager told me when I was surveying cultures in highly innovative companies, “the only failure is failure to learn”

Anne Millercreativity in R&DIdeation and creativity in R&Dovercoming failure
Previous PostHow an expert network can bring new insights ...
Next PostAutonomy, support and guidance