Probably the best known ideation technique of all is brainstorming. In this, a group of around 6-12 people get together to develop new ideas, guided by a facilitator and a few basic rules.

These rules can be summarised as

The concept was invented in around 1939 by Alex Osborn and, when done well, by the right sort of people, with an experienced facilitator, it has real strengths and can produce large numbers of ideas. Amongst these will be a few genuinely new, good ideas, which are relevant to the problem at hand. It’s also great fun.

Although Osborn claimed that a brainstorm would produce more ideas than the participants would have done alone, some academics have disputed this.

In my opinion, as a practitioner and facilitator, if you are to make brainstorming work well, there are a few things you need to pay careful attention to:

Fixation is the biggest danger when brainstorming, because a group tends to get fixated on a particular direction, which may well not be the best (even though it will feel like it at the time!) As facilitator, it’s your job to try to get the group to explore the whole possible solution space for ideas, so you’ll need to prepare yourself with some appropriate stimulus questions and interventions to break them free of the inevitable fixations.

In a R&D situation, one useful technique is to focus on a different aspect of the constraints in turn. So for example, if they group had been focussing heavily low cost ideas for a product, I might break them out of the rut by asking “so what could we do if we wanted to make it as strong as possible, cost no object?” It’s also useful to encourage dissent, but in a positive way: for example getting people to say “yes and”, instead of “yes but.”

Personality preferences have a big influence on how well people perform in a brainstorm. Some people fit the classic stereotype of creative people. They love producing lots of new ideas, love following their hunches and making unexpected connections between apparently disparate ideas. As a result they love a good creative brainstorm. (Myers Briggs MBTI would classify these as NPs: I tend to refer to them as “Creative Mavericks”)

However another important section of the population has much more private and contained creativity, that needs more time to incubate. As a result they don’t really like the quick fire nature of a creative brainstorm so at best, are likely to sit there quietly doodling, then a few days later come up with some really excellent creative ideas. (Myers Briggs MBTI would classify these as NJs: I tend to refer to them as “Visionary leaders”) 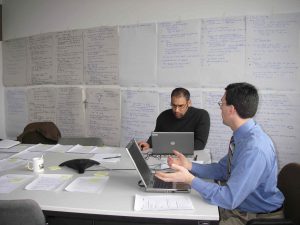 Both the “Creative Mavericks” and the “Visionary Leaders” are likely to make an important creative contribution, but their creativity needs to be harnessed in different ways…. and not always in a brainstorm.

Finally, filtering. Although a brainstorm needs to be run in a positive, accepting frame of mind, it’s not actually useful to have an undifferentiated list of say 700 ideas. To make them useful, you need to identify the relatively small proportion that will be worth following up. And because picking these will require intuition, diversity, creativity and judgement, it’s always best if you can involve the workshop participants in the process.

In any case, I strongly recommend that you always follow a brainstorm by immediately writing it up, otherwise important aspects of the ideas and their mutual interactions will be lost.

Anne Millerbrainstormbrainstormingcreative mavericksIdeation and creativity in R&D
Previous PostTake your brain for a walk
Next PostWhat do you think about roadmapping?