Take your brain for a walk

The ability to produce creative work that is both novel and useful is often marked by impasses, especially if time is not generous to you.

Coming up with truly original ideas may feel frustrating like being lost in a maze.

Getting off my desk 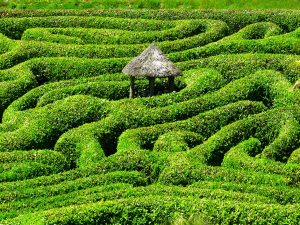 Walking can take you out of the creativity maze

Many times when I am stuck and my creative confidence is undermined, I leave my desk and go for a vigorous walk or run. While walking or running I let my mind wonder: thoughts flow free, they come and go.

I have a path I take across the fields without too many distractions, so I do not get preoccupied by crossing roads or bumping into people in know.

While running or walking intensively new connections form, and my mind opens to different perspectives. Physically this is a very mundane way to fight with impasse.

Charles Darwin, Sigmund Freud, Harry S. Truman and other great minds knew that there is more in walking rather than just a cardiovascular fitness.

Charles Darwin walked in the morning and afternoon as a part of his intellectual routine. [1] There was a gravel track near his home in Kent which Darwin called his “thinking path”. Sigmund Freud, conducted his first training analysis on Max Eitingon in 1907 through a series of evening walks. [2] Harry S. Truman, the 33rd President of the United States, woke up at five each morning for an energetic walk of a mile or two, dressed in a business suit and tie! [3]

The positive effect of walking on creative thinking was proved by Stanford University researchers.

Participants were then asked to produce analogies to a given statements such as “budding cocoon”, this is known as Barron’s symbolic equivalence task. [5] BSE  measures divergent thinking by asking participants to generate analogies. For instance “coming out of a meditation retreat” was considered a high-quality analogy for the “budding coccon” statement. Walking outside produced the most novel and highest quality analogies.

The effects of outdoor stimulation and walking were separable. Researchers concluded that walking opens up the free flow of ideas, and it is a simple solution to increase creativity and physical activity.

What happens when you walk your brain?

Arne Dietrich, a professor of cognitive neuroscience and the author of the book “How Creativity Happens in the Brain” says that creative process can be both deliberate and spontaneous. [5]

Deliberate creativity requires working memory, sustained attention, intellectual flexibility, and judgment of relevance for which a prefrontal cortex in the brain is responsible. However, during a physical activity the brain uses the neural resources to direct bodily motion and therefore the activity of prefrontal cortex is minimized, which is known as a state of transient hypofrontality. This is when spontaneous creativity happens.

Arne Dietrich explains that the slowdown of the attention system allows unconscious thoughts that are somewhat more random, unfiltered, and bizarre to be represented in working memory. The brain function that judges the appropriateness of ideas is also less active therefore novel connections that do not conform to convention might have a lower threshold for being represented in working memory.[6]

What if you hate walking and running?

The state of transient hypofrontality can be also induced by other physical activities such as swimming, biking, running, or hiking. Exercising helps your conscious mind to relax, and your inner critic to rest. You might be surprised by unexpected and original combinations that emerge. Otherwise try daydreaming.

Barron's symbolic equivalence taskcreative ideationIdeation and creativity in R&DIeva Martinaitytetake your brain for a walk
Previous PostLearning from the past: portfolio management ...
Next PostTo brainstorm, or not to brainstorm