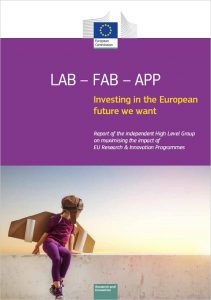 Europe is a global scientific powerhouse. It has all the necessary ingredients to shape a prosperous and safe future but it suffers a growth deficit which is fuelling social disenchantment, according to a report “Lab-Fab-App: Investing in the European Future We Want” just launched by the European Union.

But compared to other major economies, Europe suffers from a growth deficit which, together with the experience of uneven progress, fuels social disenchantment and political divisions across the continent.

At the heart of Europe’s slow growth lies its innovation deficit. Europe does not capitalise enough on the knowledge it has and produces. The EU trails well behind many trading partners when it comes to innovation.

The report calls for action

The contribution of the UK to the innovation landscape was recognised.

It states: Whatever Brexit modalities are agreed between the UK and the EU by 2019, full and continued engagement with the UK within the post-2020 EU R&I programme remains an obvious win-win for the UK and the EU. The UK has one of the strongest science bases of all European countries. A positive cooperation model (e.g., based on mutual investment) should be established, so that the UK remains part of the European Research Area.